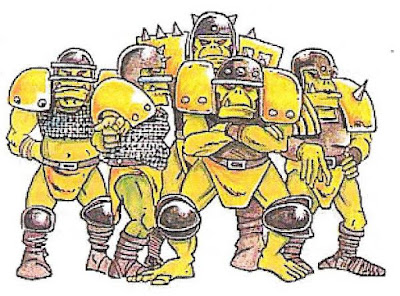 With the recent release of the Black Orc team box from Games Workshop, I have guilted myself into completing my first team for season 2.
With only 3 choices open to coaches you may be forgiven to think that selecting your team is easy. However there is one questions that has been making me deliberate my team selection.
TO TROLL OR NOT TO TROLL?
With 1,000,000 gold coins to spend on your team 115,000 of it is a lot to burn in 1 player.
My list with a Troll is as follows:
5 Black Orcs
1 Trained Troll
5 Goblin Bruiser Linemen
2 Re-Rolls
Coming in 1,000,000 Gold Coins
With a Troll in the centre of the pitch wether you are on offensive or the defensive certainly adds an intimidation factor of 10 and he is going to put out his fair share of tackles. However it is the lack of a reserve and the chance that the Troll might just stand there has made me go with the following options.
6 Black Orcs
6 Goblin Bruiser Linemen
3 Re-Rolls
1 Additional Dedicated Fan.
Total of 1,000,000 Gold Coins
Now this team is all about the Black Orcs hitting and punching holes in the oppostions line allowing space for the nippy Goblins to try and grab the glory of a Touchdown!
In terms of development of the team I generally really do not plan to far in the future due to my appalling dice rolls and loss of  players.
For colour scheme  I have tagged the original GW colour scheme, I always wondered why GW went with Black and Yellow rather than the Black and Silver of the Oakland Raiders where the team was obviously taken from.
I am going to some hints from the original team colour but head more to the Black and Silver of the team that I have followed for many a year. However this might make them look similar to the Thunder Valley Greenskins so gonna have to work hard on making my team look unique.
Tune in upcoming weeks on the progress of the team.
Also hoping in this weeks Warhammer Fest we get some cool BloodBowl News
at May 06, 2021

The Warhammer Community posted up today the latest Star Play to run ok well stomp onto the pitch. It is an age old fan favorite  Frank ‘n’... 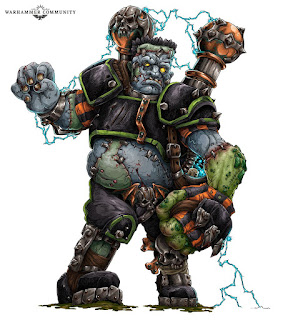